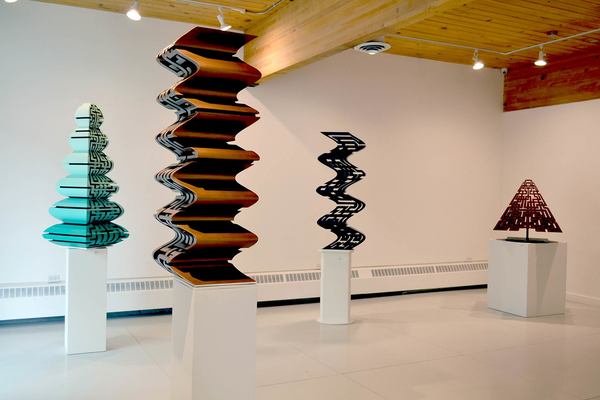 Mark Ollinger’s work examines the linear progression of time, mapping the trajectory of a conscious experience as it weaves through space and time. Ollinger creates sculptural works and paintings out of wood, fibres and other materials to highlight a singular line folding over and under itself, describing both symmetry and hidden language. The continuous line acts as a symbol for multiple systems and meanings such as calendars, historical timelines, charts, compasses, transit and roads, or depictions of natural systems.

Much like the idea of a line being a symbolic description of time, written language also
symbolizes abstract concepts that are experienced throughout one's life. The words built into the line and hidden within the sculpture describe how these abstract ideas build and form the framework that shape an individual path. Graffiti initially informed Ollinger’s interest in how a singular word can be a stand alone work in itself and how contextually the meaning can change based on the viewer. Graffiti recognizes and highlights words having potential as autonomous objects, ones which have contingent understandings and unique perspectives.

Each multi-dimensional artwork develops over a time-intensive process of designing, problem-solving and constructing by machine and by hand. In this way the cyclical and continuous unfolding of time is both conceptually and materially built into the work striving for material balance and visual optics. A singular line folding both over and under itself references a balance of experiences, if looked at closely the lines interweave chaotically yet from a distance they create an equilibrium and symmetry. This weaving is amplified with the use of mirrors shifting colours of both raw and painted woodgrain.

In both practice and concept Ollinger’s work exists and the intersection of a mathematical plane, a woven language, a daily routine and modern aesthetic. Mark Ollinger’s work forces the viewer to get on his wavelength. To see through a lens that shows time collapsing into a single path, representing that path as an illusive yet valuable and materialized experience.
Loading...